The Philadelphia Jr. Flyers EHL junior team is pleased to announce that alum and former captain Jonathan Ruiz has signed a camp contract with the Cincinnati Cyclones of the ECHL. The Cyclones, the defending ECHL regular season champions, are a farm team for the National Hockey League’s (NHL) Buffalo Sabres.

Ruiz - a Williamstown, NJ native – played his entire junior career with the Jr. Flyers. In three seasons, he averaged over a point a game having accumulated 126 points (73 goals and 53 assists) in 124 games.

It was his last season (2014-15) in which Ruiz had a career year. After being named the Jr. Flyers team captain, Ruiz was all-Eastern Hockey League (EHL). He was the league’s Most Valuable Player, Forward of the Year and First team all-star. He also led the league in total points (67) and most goals (36).

“I wouldn’t be where I am today without coach Jerry Domish” stated Ruiz. “Jerry challenged me every year. We identified areas of my game that needed improvement and we worked very hard to overcome them to make me a more complete player. He gave me the chance to do whatever it took to elevate my game and take it to the next level” concluded Ruiz.

The next level Ruiz mentioned was an NCAA Division III commitment to Johnson & Wales. After playing a year and a half at J&W, Ruiz transferred to UMass Dartmouth. During his college career as a Corsair, Ruiz amassed 73 points (42 goals and 31 assists) in 65 games. He was The Massachusetts State Collegiate Athletic Conference (MASCAC) Player of the Year and was MASCAC First Team All-Conference in 2017-18. He was the Corsairs team captain in 2018-19.

“I’ve always loved playing hockey since I was a little kid” said Ruiz. “Now I have a chance to play professionally. I’ve been given a great opportunity to continue to play a game that I love and do it for a living. I take great pride in that” stated Ruiz.

As Ruiz prepares for training camp, Ruiz stated that he often checked on the EHL and his former junior team while he was in college.

“I really enjoyed playing in the EHL! It is a great league with excellent coaches and skilled players with whom many of them make NCAA commitments” said Ruiz.

“I loved playing for the Jr. Flyers” stated Ruiz. “It is a very classy organization with great facilities. I remember battling through injuries my last season and one game I had to be rushed to the hospital and the emergency room doctors had to cut all my equipment in half to evaluate my back. John Graves, the Jr. Flyers owner, didn’t blink an eye and bought me all new equipment. The Jr. Flyers are one big family – one that I’m very proud to have been a part of” concluded Ruiz.

“I’m very excited for Jon” stated Domish. “He was always a great kid with plenty of potential and the thing that set him apart from other players was his coach ability. I remember his first few months when nothing was going his way and he came into my office and said, “coach tell me what to do.” From then on, he excelled. And if there ever was a coach’s player, he was it. I wish him all the best and I’m very confident he will be successful at the next level” concluded Domish. 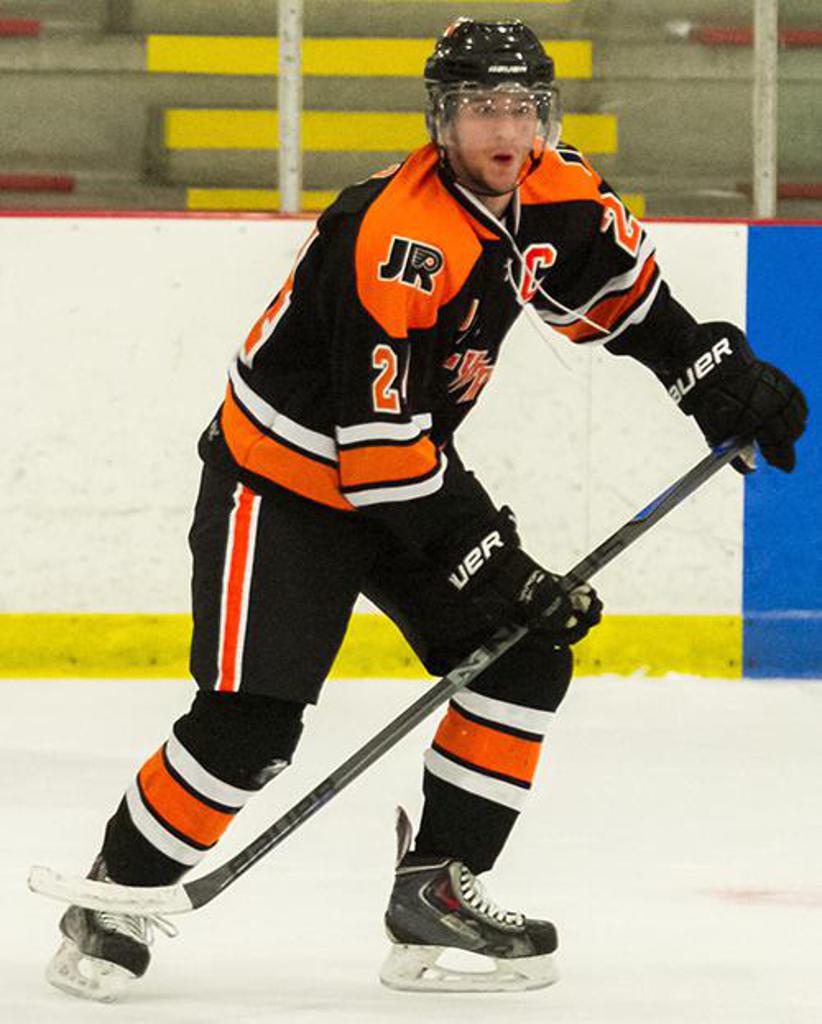