EHL Jr. Flyers roll to 5 – 2 win over to Connecticut Chiefs

The Jr. Flyers defeated the Connecticut Chiefs 5 – 2 earlier today in game two of the Eastern Hockey League’s Showcase in Exeter, NH.  Jonathan Gabriel and Nick Simsir each had a goal and an assist.

Simsir got the Jr. Flyers on the board just forty-seven seconds into the game. After the Jr. Flyers won the draw outside their zone, Gabriel picked up the loose puck and brought it into the Chiefs zone. He passed it over to Simsir on his right and the Haddonfield, NJ native took a sharp angle shot that hit the far side post and into the net past Connecticut’s goaltender Brenden Carew to make it a 1 – 0 game.

Two minutes later Gabriel doubled the Jr. Flyers lead. After the Chiefs dumped the puck deep into the Jr. Flyers zone, netminder Sean Dynan went behind his net to set the biscuit up for Justin Brown. As Brown picked up the puck behind his own net, he sent it back to Simsir who make a long outlet pass to Gabriel at center ice. Gabriel entered the offensive zone on a one-on-two. As Gabriel went to his left, he cut back towards his right and beat Carew low, blocker side for his sixth goal of the year.

John McCuen would make it 3 – 0 at 6:30 of the first half. Brown, after outskating a Chiefs’ forward for the puck deep inside his own zone, left a drop pass for Adam Nilsson who skated behind his own net and passed it up to Shane Ward. The assistant captain brought the puck up the near side boards and into the Chiefs zone. Ward passed it over to McCuen on his left and McCuen went from his backhand to his forehand and beat Carew top shelf for his ninth goal of the season.

Carew was pulled in favor for Nathan Shield.

The Jr. Flyers went up 4 – 0 at 11:12 of the first half on Billy McDevitt’s team high eighteenth goal of the season. With the puck behind his own net, Dynan passed the puck up slightly to McDevitt who skated from end to end. As McDevitt skated to the slot, he cut to his right and beat Shield top shelf.

Dynan stopped 30 of 32 shots while the Carew and Shield combined to stop 23 of 25 shots. Click here for the box score.

The Jr. Flyers next games will be played on Saturday and Sunday against the Connecticut Roughriders at the Sono Ice House in Norwalk, CT. 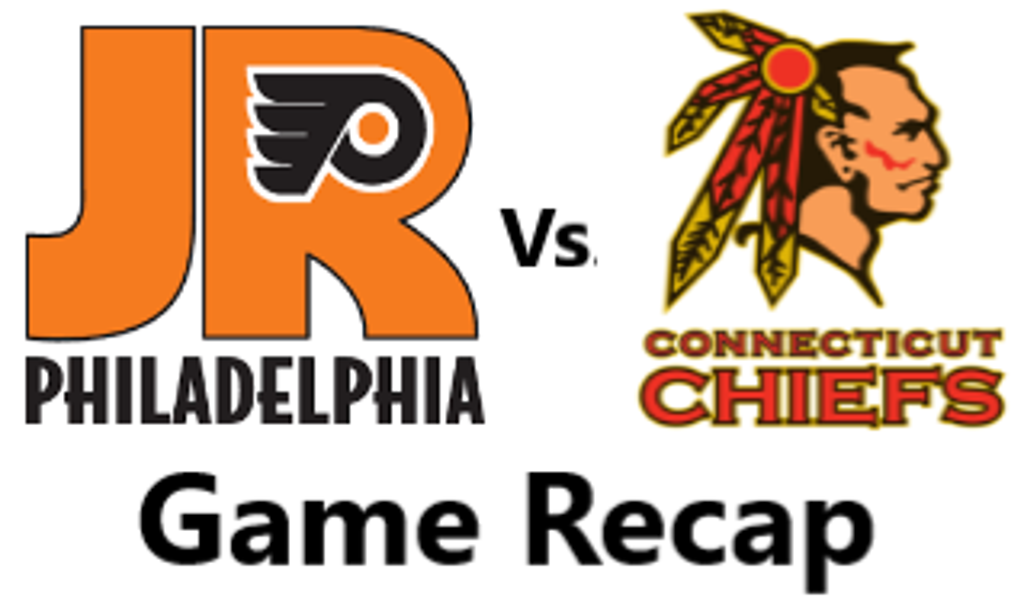