The Philadelphia Jr. Flyers Junior team, proud members of the Eastern Hockey League, is pleased to announce that defenseman Riley Dohner has committed to play NCAA Division III Ice Hockey for the University of Southern Maine Huskies who play in the New England Hockey College (NEHC). His commitment begins in September 2020.

After coming up through the ranks of the Jr. Flyers midget program, Dohner, 20, players two seasons with the EHL team in which he had nineteen points (3 goals and 16 assists) in 78 games with an average +19.

“I would like to thank my family and friends for their support through the years” stated Dohner. “I also would like to thank everyone in the Jr. Flyers organization for making me not only into the player I am today but the man I am today. I played at the Jr. Flyers at the 16, 18 and junior levels and I can say its hands down one of the best programs in the country and I wouldn’t be where I am today without them.

“Riley came to us from our 18U team and was with us for two years” stated head coach Jerry Domish. “He almost immediately was a top four defenseman. He also took over the leadership with the defenseman and kept them on point. He will definitely be missed, and I know he will have a solid college career” concluded Domish.

The University of Southern Maine is in Portland, ME. The Huskies head coach is Ed Harding. 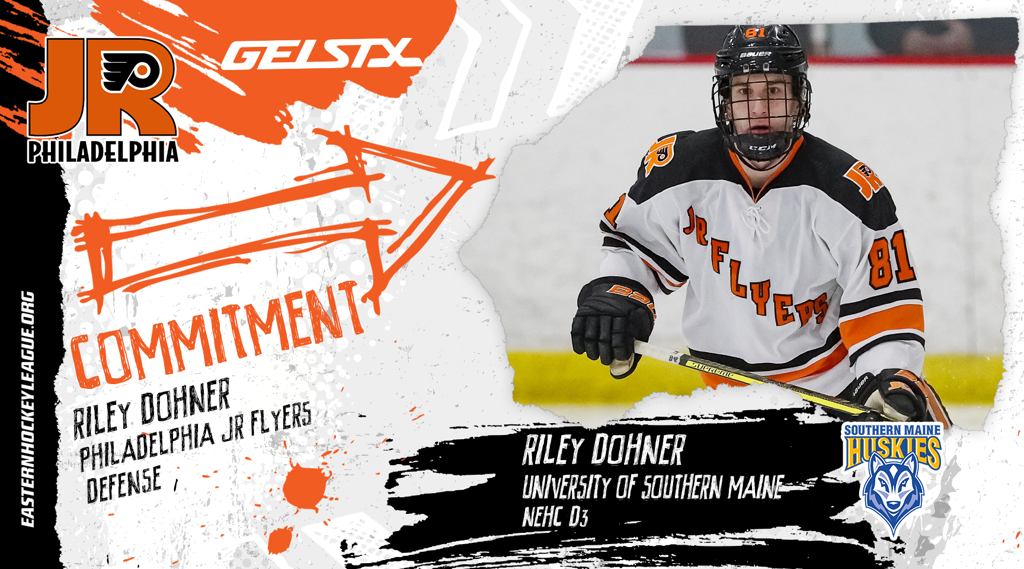