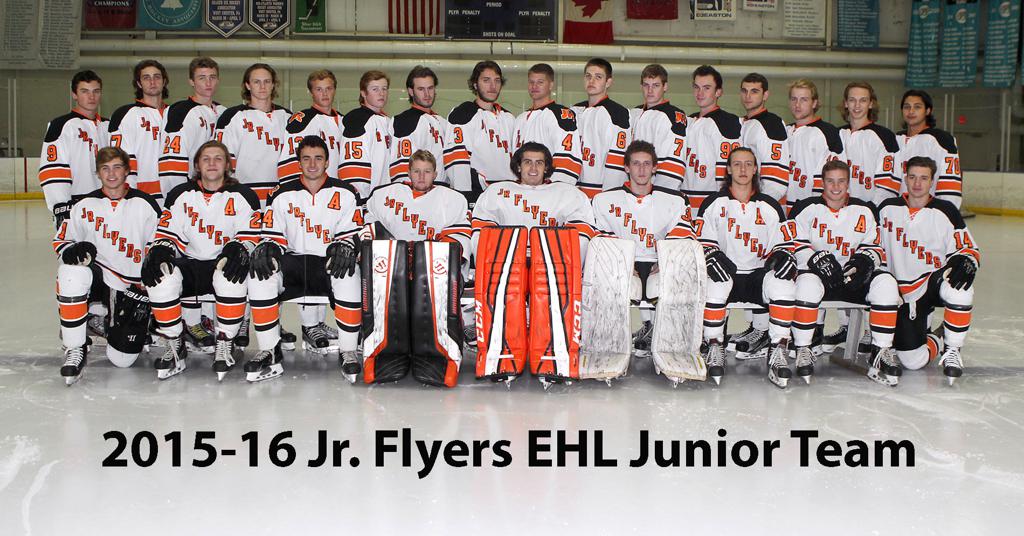 It All Comes Down To Tonight

Last night was Game 4 of the Eastern Hockey League Finals. The Little Flyers had a 2-1 series lead (Best of 5) over the JRFlyers. It was the last home game for the JRFlyers who were looking to force Game 5. The Little Flyers took the lead with less than five minutes left in the game making it 4-3.  With 1:11 left the JRFlyers called timeout, and pulled (G) Mac Vail. The JRFlyers kept pressing and just about everyone was crashing the net. The puck landed on the stick of  Barry Kneedler and he tied the game 4-4 with only :42 left forcing overtime. The Overtime was pure excitement as both teams traded opportunities but neither team could score and we remained tied after the 1st OT. Late in the 2nd overtime is was Kneedler again, this time scoring from center ice giving the JRFlyers a 5-4 victory to force Game 5 tonight.

Tonight’s game will be in Aston, PA at the Ice Works at 6pm. One more time it will be JRFlyers vs Little Flyers and the winner takes home the Championship.

The Eastern Hockey League Finals has finally arrived. Division Rivals clash as the Philadelphia JRFlyers and Philadelphia Little Flyers battle in a Best of five Series for the Championship.  The Little Flyers are the higher seed ( LF #1 , JRF #2) but Head Coaches Jerry Domish (JRFlyers) and Rocky Russo (Little Flyers) have agreed to the format of 1-1-1-1-1, instead of traditional format 2-2-1 or 2-3. Games one and two were over the weekend with both teams hosting a game. Friday was at the Ice Works in Aston, PA and Saturday the JRFlyers were home at the Ice Line in West Chester, PA. The venues are just a mere 15 miles apart.  With two games in the books, let’s recap the Finals so far.

“We knew coming into the series that special teams could be a big factor. We took too many penalties and it hurt us. We got out of our game and didn’t stick with it and it ended up costing us in Game one.” Josh Hinderliter

“We started the game well and put up a goal early which is what we wanted. After that we kind of cruised and didn’t have the pressure we’ve been playing with throughout the playoffs. We let them comeback and they won in overtime.” Tommy Dougherty

It was the Little Flyers getting on the board first as (G) Vail made the initial save but the rebound was sent to the back of the net giving the Little Flyers a 1-0 lead. Just a few minutes later the JRFlyers had pressure in the offensive zone. Ruppe and Platt worked along the wall and Taylor corralled the loose puck. He skated to the slot then fired it by (G) Giacobbo tying the game 1-1. Late in the period the JRFlyers had a power play. Manning won the face off back to Castagna at the point. Castagna took the shot and burying the rebound was Kneedler to give the JRFlyers the 2-1 lead. In the 2nd period the Little Flyers forecheck forced a turnover in the JRFlyers zone and they capitalized with a shot right in front of (G) Vail to tie the game 2-2. Just a couple of minutes later Benitez carried the puck into the offensive zone and took a wrist shot that squeaked by (G) Giacobbo giving the JRFlyers a 3-2 lead. Late in the 2nd period the JRFlyers kept up the strong forecheck creating offensive chances. Benitez took the puck out of the corner and slid it to Kneedler in the slot. Kneedler made no mistake burying the shot top shelf and making it a 4-2 lead for the JRFlyers. The Little Flyers kicked it up a notch trying to fight their way back. Tempers flared after a controversial play with about eight minutes left in the 3rd period. The Little Flyers were battling for possession in the corner of the offensive zone. The puck was thrown out in front and it hit off of (G) Vail’s blocker. The puck bounced up over the shoulder of Vail and slid towards the back of the net. The defense quickly played it away and the referees blew the play dead. After a quick conversation the officials ruled no goal keeping the score 4-2. The Little Flyers continued to heavily pressure the defense but Vail and the JRFlyers stood the test keeping the Little Flyers off the board. Time ran out and the JRFlyers took Game 2 of the EHL Finals 4-2 and tying the series 1-1. Mac Vail picked up his 7th win of the postseason making 27 saves.

“They (Little Flyers) were all over us right from the start. It was tough; they had their forecheck going and scored and early goal. I’m proud of our team and how they dealt with adversity, the game didn’t start the way we wanted it to, but Hayden (Taylor) and Barry (Kneedler) had some big goals and got things rolling for us.” Chris Butryn.

“We knew that we had to come out and compete from the start. We knew they (Little Flyers) would come out strong and we weathered the storm. When it was our time we buried a couple chances and never let up. One goal leads aren’t safe in this league so to get that insurance goal it allowed us to continue our game defensive minded.” Hinderliter

We had a lot more energy than we did in game one. Kneedler had a pair of goals for us and going up by two was huge for us.  But no matter what you can’t quit, we kept battling hard and defended our lead to get the win.” Dougherty

After all the excitement of the EHL Finals, things settle down and go back to normal routine. Both teams now return for a week of practice before the final weekend of the season.

“It’s nice to have a little rest for everyone really. During the week of practice we’ll fine tune our game a little bit and fix little things. It’s a best of three series now, every shift matters every bounce matters, we have to give 100% effort from here on out.” Butryn

The Finals now shift to a format that both teams are used to seeing, Best of Three. That was the format for the playoffs up until this point, but with the teams splitting the first two games, that is exactly what’s in store.

Rematch time #JRFlyers are looking to split the weekend against @applecorejunior Puck drop coming up at 11am live… https://t.co/hCa20Zbfxd

RT @EHL_Hockey: Today’s schedule of games includes a potential playoff preview as this week’s Game of the Week. Catch each matchup live on…

Final A hard fought game all the way, but the #JRFlyers fall 1-0 to the New York Applecore Shots 38-31 NY