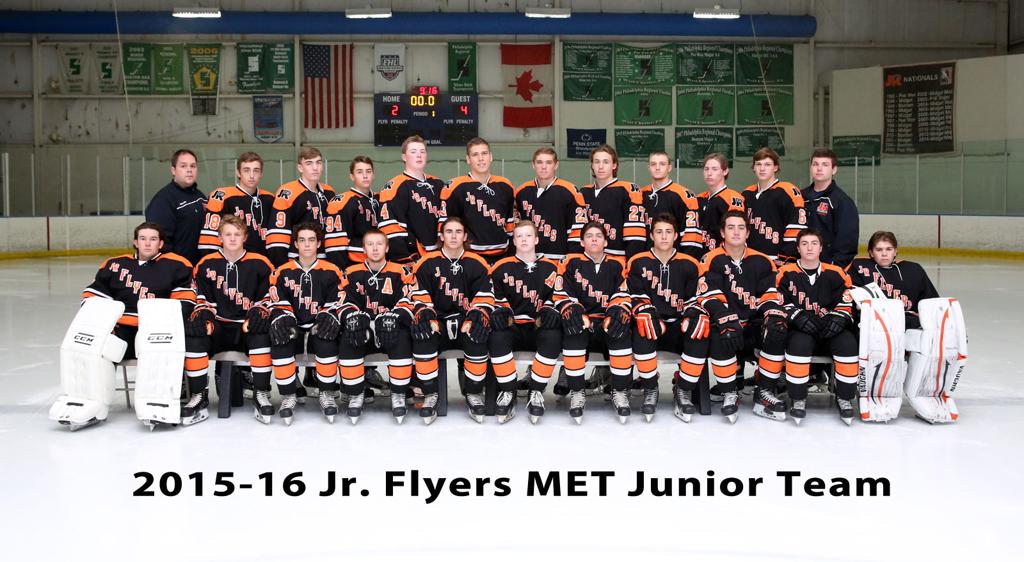 JRFlyers Gearing Up for Round Robin

The JRFlyers ended their season on a sour note. Saturday’s game was a wild one as the JRFlyers lost 7-6 to the Regular Season Champion Vermont Lumberjacks. On Sunday it was a hard fought battle but the JRFlyers lost in a shootout 2-1 to the New Hampshire Monarchs. It wasn’t the ideal way to finish the season but the JRFlyers overall had a great year. They head to the EHL Elite Playoffs with a 30-10-2 record for 62 points. The Philadelphia Revolution has an identical record and through the EHL tiebreakers claim 1st place in the Southern Conference. It doesn’t really make much of a difference as the 1st Round of the EHL Elite Postseason will be a Round Robin, meaning each team in the Conference will play against each other. The other two teams in the Southern Conference Playoffs are the Hartford Jr. Wolfpack and the Brewster Bulldogs.

One reason that has been key to the team’s success is the depth that they have. The JRFlyers finished with seven players having 20 points or more. Skyler Thomas has led to the way with:  23 goals, 31 assist for 54 points. The Captain Anthony Thurston has a total of 35 points and Assistant Captain Trevor Rucci right behind him with 34. On the defensive side Assistant Captain Alex Seibel finished the year with 20 points which led all JRFlyers defensemen.

The JRFlyers are familiar with all of the teams they face this weekend and have had success against each team. Starting with the Brewster Bulldogs, the JRFlyers haven’t had a problem putting the puck in the net and swept the season series 4-0. In those four games the JRFlyers won by a combined score of 29-7. The next game in the Round Robin is against the Hartford Jr Wolfpack. Each time these teams faced off the games did not disappoint. In the November series in the first game the JRFlyers were down 2-1 late in the game. David Fisher scored in the final minutes to force overtime. Just a few minutes into the overtime it was Fisher again and his goal gave the JRFlyers a 3-2 win. The following day all of the scoring was done in the 1st period and the JRFlyers had a 2-1 lead. Goaltender Tyler Savino was big in net to hold off the Wolfpack as the JRFlyers swept the weekend. They didn’t meet again until the end of the season just a couple weeks ago. A pair of goals by Anthony Dellarose, and scoring by Trevor Rucci, Anthony Thurston and Gannon Stuart had the JRFlyers rolling 5-2 after the 2nd period. Team defense fell apart in the 3rd period as the Wolfpack climbed back making it a 5-4 game. The JRFlyers were able to hold them off and come away with the win but the team was not pleased with their play. The following day the JRFlyers were propelled to victory behind goals by Thomas, Dellarose, Thurston, and Salerno as (G) Jake Lakatos made 38 saves in the win. The final game of the Round Robin will be against the cross town rival Philadelphia Revolution. They met five times over the course of the Regular Season. The first three games of the year were against the rivals and it broke down like this. After a three goal 1st period for the JRFlyers the Revolution came back with three goals in the 2nd period. Nobody scored in the 3rd period and it was Skyler Thomas winning it in overtime for the JRFlyers.  The next day the JRFlyers didn’t get on the board until the 3rd period but it was way too late as the Revolution were in route to a 5-1 win. The following weekend the JRFlyers only had one game and it was the third meeting vs the Revolution in as many games. Tied 1-1 at the end of regulation the game headed for overtime once again. Gannon Stuart with his second goal of the game gave the JRFlyers the 2-1 win. The fourth meeting was in November. The JRFlyers were down 3-0 in the 3rd period. Thurston and Aughey made it a game 3-2 but the Revolution added another tally and won the game 4-2. The fifth and final meeting on the regular season came in mid January. The JRFlyers were down 3-1 in the 3rd period. With less than five minutes to go in the game goals from Aughey and Stuart just eight seconds apart tied the game 3-3. A few minutes later Dom Salerno jammed a rebound home to take the lead with a little over a minute left. The JRFlyers added an empty netter and won the game 5-3. You can easily put that game in the Game of the Year category and not too many fans, players or coaches will disagree. The JRFlyers won the season series with that win and now they will meet on Sunday and it shouldn’t disappoint.

The JRFlyers have had a great season heading into playoffs. Top scorers were mentioned earlier but a three man rotation in net has also worked well for the team. The combination of Tyler Savino, John Kelly, and Jake Lakatos has kept each goaltender fresh and they have all played well this season. Savino finished the season 8-3-1 with a Goals Against Average (GAA) of 2.31 (ranked 6th) and a Save Percentage (SV%) of .921 (ranked 5th ) with 3 shutouts.  Kelly went 10-3 GAA 2.21 (ranked 4th) and an SV% of .907. Lakatos had the most win of the goaltenders and had a 12-4 record, the 12 wins ranks 10th in the EHL. He finished with a GAA 2.40 (ranked 8th) and a SV%.922 (ranked 3rd) with 3 shutouts.

Before the JRFlyers moved to the EHL Elite Division for the 2016-17 season they were in the Metropolitan Junior Hockey League (MJHL). They went to the Final and defeated the Jersey Wildcats and were crowned Foster Cup Champions. Why bring that up? Well, some of the players from the Championship Team are back this season including Assistant Captain Alex Seibel. Along with Seibel from last year is: Sam Kirby, Alec Dugan, Dom Salerno, Charlie Carsello, Gannon Stuart and Dom D’Angelo. That type of veteran leadership and experience can help this team heading to the playoffs.

The JRFlyers season may have ended on a sour note but overall they have proven time and time again why they are a dangerous team to face. After a week of practice it all comes down to starting over again, as they look for a big playoff run.

Saturday March 11th vs Brewster Bulldogs at 1:45 and 7:45 vs Hartford Jr. Wolfpack

Sunday March12th vs Philadelphia Revolution at 11am