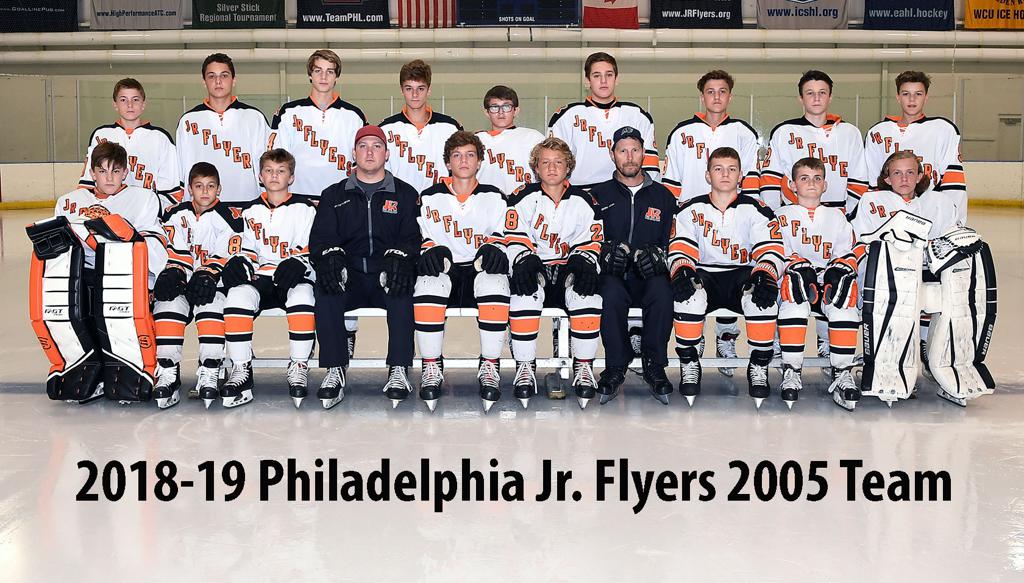 The Atlantic Youth Hockey League’s (AYHL) playoffs start this weekend and four Jr. Flyers teams have advanced to the post season: Squirt Minor (’09), Bantam Minor (’05), 15 Pure (’03) and Midget 16U (‘02/03). The playoffs start on Saturday and will conclude on Monday. The games will be held at Ice Line and Oaks Center Ice.

Squirt Minor (’09)
The top six teams in the league at each level qualify based on regular season league play. The ’09 team finished in second place during the regular season with a 21-4-3 record for 45 points.

Midget – 16U National Premier
The top four teams in the league advance based on regular season league play qualify. The 16U team finished in third place with a 14-7-1 record for 29 points.

Three Jr. Flyers teams (04, 15U and 16U) will participate in the District playoffs next weekend.

Jr. Flyers Bantam Minor goalie Ryno Harris stopped 32 of 34 shots yesterday when his Hershey Jr. Bears team lost 2 – 1 to Northern Quebec in The Quebec International Pee-Wee Hockey Tournament. Although Harris plays on the Bantam Minor team, he qualifies for this tournament since he is an '06 birth year.

The Bears took a quick lead just two minutes into the opening period. Northern Quebec would tally two goals in the middle stanza.

The Philadelphia Jr. Flyers are please to announce that eleven players who are a 2006 birth year will be participating in the upcoming Quebec International Pee Wee Tournament beginning later this week. In all, the eleven players will represent three different Pennsylvania contingents.

Ryno Harris (Hershey), who also is an ’06, plays up and is a member of the Bantam minor team.

Congratulations boys. Have fun, make memories and enjoy the ride. The Jr. Flyers wish you the best and we are very proud of you.