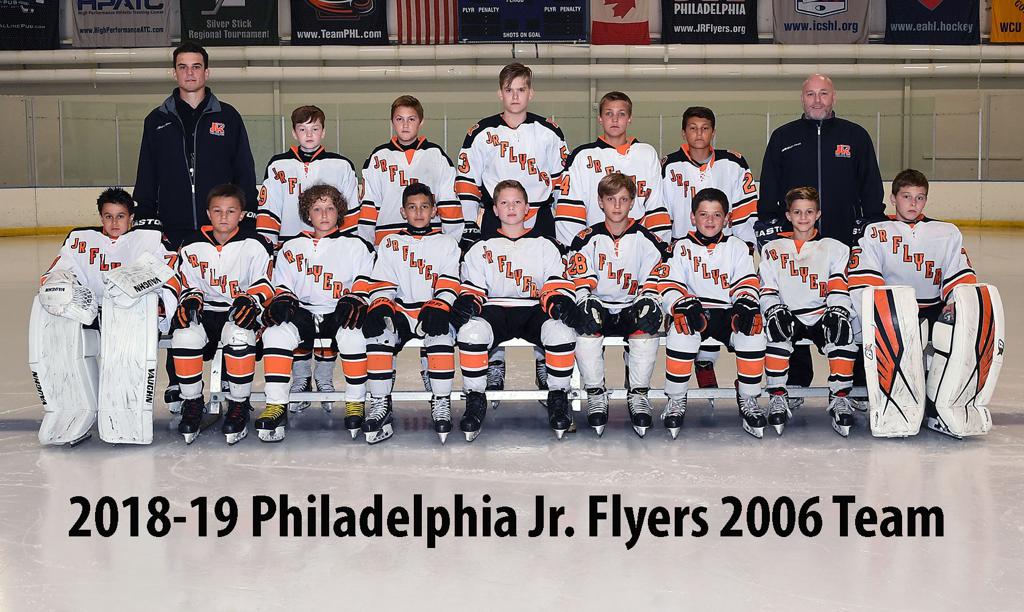 The Philadelphia Jr. Flyers are please to announce that eleven players who are a 2006 birth year will be participating in the upcoming Quebec International Pee Wee Tournament beginning later this week. In all, the eleven players will represent three different Pennsylvania contingents.

Ryno Harris (Hershey), who also is an ’06, plays up and is a member of the Bantam minor team.

Congratulations boys. Have fun, make memories and enjoy the ride. The Jr. Flyers wish you the best and we are very proud of you.

The Downingtown, PA native had five points (2 goals and 3 assists) in two AYHL games this past weekend against the Washington Little Capitals. "Tommy was awesome for us" stated head coach Tyler Hostetter. "Not only did he have great offensive stats, he played in both ends of the rink" concluded Hostetter.

White stopped 67 of 69 shots he faced (.971 save percentage) and had 1.00 goals against average in two games this past weekend. “Ajay made some unbelievable saves at huge points during the game in our 3-1 win over the Avalanche on Saturday at Ice Line” stated head coach Benny Souders. “We were out played in the first two periods and he held us in the game stopping 24 of 25 shots.  He then closed the door in the 3rd period stopping all 9 shots they through at him including a couple breakaways and several backdoor highlight real saves.   He played again on Sunday and stopped 34 of 35 shots in a 1-0 loss to the Saints in Ramapo.  He played outstanding again and gave us every bit of opportunity to win that game” concluded Souders.

Midget Player of the Week – No award

Heading into this season Pee Wee Major head coach Ben Souders thought that after losing two key players his team would have a slow start. But with an overall record of 9-5-1 and the addition of four new players, his ’06 team has exceeded his expectations.

“Our boys have an incredible work ethic” stated Souders. “Coach Tom Weekes and me expect it, and they’ve bought into it.  We don’t score a lot of goals, but we are a very sound, defensively minded team. We are strong between the pipes with Whitey and Keazo, and we are deep at the blueline. Our forwards are tenacious backcheckers which essential to our success and minimizes high-scoring contests” concluded Souders.

Despite averaging over 35 shots per game on opposing goalies, the ‘06’s have scored 32 goals while only allowing 24 in sixteen games.

“We don’t have a lot of flash, but we play a team game, and we play it the right way,” said Souders. “We have a core group of players who have played together for a few years, and the entire team all looks out for each other” Souders continued. “We have never had a player on our team that averages three or four points per game like most of the teams we play against do.  In the short-term, that doesn’t help us win squirt and pee wee championships, but when it comes time to send the boys on to higher levels, coaches and scouts will immediately take notice of how each one of our players do all the ‘small things.’  Doing the ‘small things’ right is how you win championships at the higher levels.  I know because I’ve been there.  The skills it takes to score four goals in a pee wee game are not the same skills it takes to be successful at the highest levels of hockey.  Coach Tom and I focus on building individual skills, but we also have a strong focus on building Hockey IQ, an intellectual understanding of how the game is played on an individual level, and more importantly, on a team level.”

“Every year at tryouts, we look to find players that want to be here for the long-term.  A lot of youth teams in this area seek out “one-year contracts,” where they convince a family to drive four hours to practice three times each week.  When picking our team, Tom and I are looking for players that are smart, skilled, tenacious, motivated and team-oriented.  We have a family-like environment in our locker room.  No one player is more important than another.  When we bring new players on to our team, we need to make sure they mesh with our team and become part of our ‘band of brothers.’   This year, we accomplished exactly that,” stated Souders referencing his newcomers Brady Founds, Liam Sheward, Benjamin Branco and Michael Kealey. “’Foundzy,’ ‘Shewzy,’ ‘Bronco,’ and ‘Keazo’ have been great additions and fit in perfectly,” said Souders. “Yes, I have nicknames for all the boys,” added Souders.  “Any hockey player that ever makes it beyond youth hockey will never be called by their real name in the locker room ever again. They might as well get them used to that now,” Souders said with a smirk.

With a ton of games remaining, Souders’ main goals are to continue to improve each player’s individual skills, hockey IQ, and make the playoffs. If the boys continue to work hard and play as a team, making the playoffs is more probable than possible.