The EHL Jr. Flyers defeated their archrival Philadelphia Little Flyers 2 – 1 in a matinee game today at Ice Line. It was the Jr. Flyers first win of the season.

After a scoreless first period, the Jr. Flyers took the lead at 3:17 into the middle stanza. Colby Walters picked up the loose puck at the blueline inside the Little Flyers zone. As he skated towards the bottom of the faceoff circle, he took an off angle shot that was saved by Little Flyers goalie Thomas McLarnon but the rebound came out in front. While several Little Flyers tried to clear the puck, Jr. Flyers co-captain Billy McDevitt was able to pick it and take a shot on net that McLarnon saved but the puck trickled through his legs and into the net for his third goal on the season.

The Jr. Flyers would double their lead at 8:53 into the second. After the Jr. Flyers had just killed off a penalty, the Little Flyers still had the puck in the offensive zone. Little Flyers defenseman Dante Gattone took a shot that was blocked by Jr. Flyers forward Schuyler Dillon. As the puck rolled into the Jr. Flyers zone, Dillon outworked two players and skated around McLarnon’s net. Dillon tried a wraparound, but the puck went through the goalmouth where it was picked up Filip Balaz who one-timed it past McLarnon for his first goal on the season.

The Little Flyers would cut their deficit in half with 6:37 into in the third period. Forward Ryan Candia picked up the loose puck in the corner and skate back up along the far side boards. He sent a pass back to Soren Bredeson at the near side point. Bredeson took a shot on goal that was redirected by Ryan Turse out front and past Jr. Flyers goalie Sean Dynan to make it a 2 – 1 game.

“I was really proud of our guys” stated head coach Jerry Domish. “The Little Flyers have a very good team. I though we played very well today for all sixty minutes. It was a great team win” concluded Domish.

Dynan turned aside 25 of 26 shots while McLarnon stopped 18 of 20. Click here for the box score.

The Jr. Flyers are back home on Wednesday for another noon game against another rival the Philadelphia Revolution. 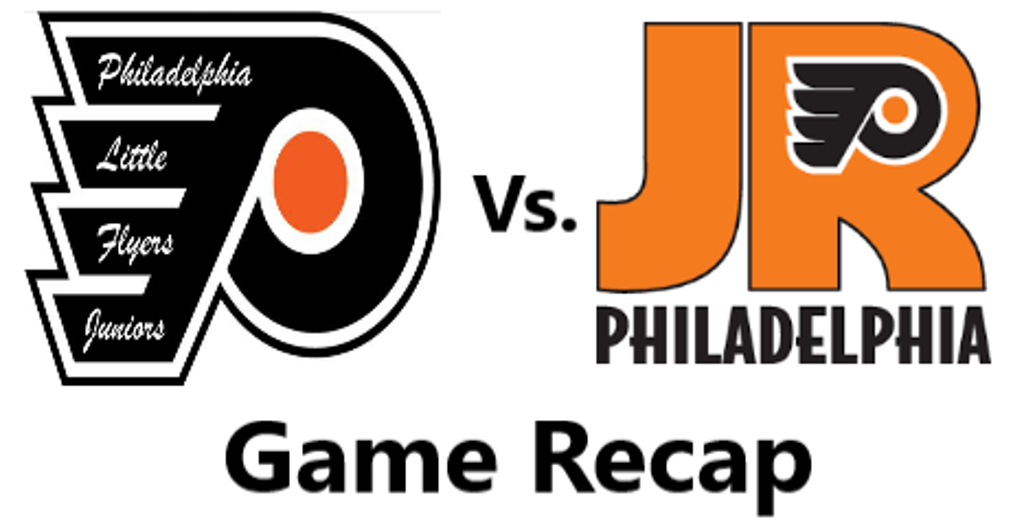