The EHL Jr. Flyers will host the Philadelphia Revolution in a matinee game today at Ice Line starting at noon. This will be second meeting between these teams this season.

Jr. Flyers vs. Revolution Overview
The first time these two teams met the Jr. Flyers overcame a 2 – 0 deficit to roar back to tie the game in regulation and co-captain Shane Ward scored in overtime to give the Jr. Flyers a 3 – 2 win. Neither converted on their power play opportunities.

The Revolution’s Brayden Patricia (2 goals) and Jordan Sergo (2 assists) each have two points against the Jr. Flyers. Anthony Del Tufo stopped 28 of 31 shots and had a 2.81 goals against average.

Justin Brown (2 assists) and Ward (1 goal and 1 assist) each have two points against the Revolution. Aron Hansson stopped 26 of 28 shots for a 1.88 goals against average.

Revolution Overview
The Revolution are currently in first place in the Mid-Atlantic Conference with a 11-5-1 record for 23 points. They have won five of their last ten games, and they are coming off a 5 – 4 road loss to the Philadelphia Little Flyers. The “Rev” have scored 84 goals (most in the EHL) while they have allowed 50 (10th in the league). They have converted on 14.1% of their chances on the power play while they have prevented the opposition from scoring on the penalty kill 85.2% of the time.

The Revolution are led by Matt Pasic and Patricia’s twelve goals respectively while Mark Tosti leads the team in total points with 27 (11 goals and 16 assists). Anthony Del Tufo leads the team in wins with five between the pipes. Duncan Nichols-Delay has the team’s best .71 goals against average and .953 save percentage.

Jr. Flyers Overview
The Jr. Flyers are currently in sixth place in the Mid-Atlantic Conference with an 8 – 8 record for sixteen points. They have won seven of their last ten games but they are coming off of a 5 – 2 home loss to the New York Applecore. They have scored 39 goals (third worst in the league) while they have allowed 41 (7th best in the league). They have converted on 8.8% of their power play chances while they prevented the opposition from scoring on the penalty kill 86.8% of the time. 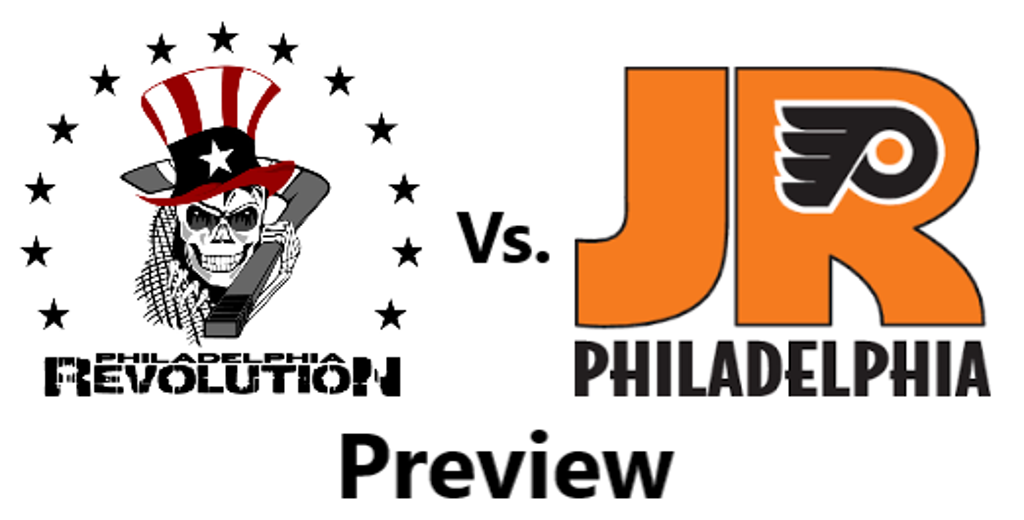