The Philadelphia Jr. Flyers Junior team, proud members of the Eastern Hockey League, is pleased to announce that forward Nick Simsir has committed to play NCAA Division III Ice Hockey for the Nazareth College Golden Flyers who are members of the United Collegiate Hockey Conference (UCHC). His commitment begins in September 2020.

Simsir, 20, played one season with the Jr. Flyers. The Haddonfield, NJ native had five points (2 goals and 3 assists) in 21 games this year.

“I am incredibly excited to be able to play hockey at Nazareth” stated Simsir. “I can’t say this would have happened without coach Jerry Domish, who I’ve had the honor of knowing and having his guidance over these past few years. I also would like to thank coach George Roll at Nazareth for giving me the chance to play college hockey. Of course, my parents for doing everything under the sun to give me the best chance to continue playing hockey as well as my younger brother for giving me at home workouts to stay in shape during this quarantine. Finally, I should thank my past coaches and teammates for letting me stay persistent in reaching this goal” concluded Simsir.

“I’m extremely happy about Nick’s commitment” stated Jr. Flyers head coach and general manager Jerry Domish. “He was all set to play here this season when he started to have second thoughts on his ability to get a D3 offer. So, he went to college only to come back and fulfill his dream of playing college hockey. He is extremely talented and has outstanding hockey sense. When his confidence is high there is nothing he cannot accomplish. I know he will be very successful at the next level” concluded Domish.

Nazareth College is in Rochester, NY. The Golden Flyers’ head coach is George Roll. This past season the Golden Flyers had a combined 12-12-3 record. 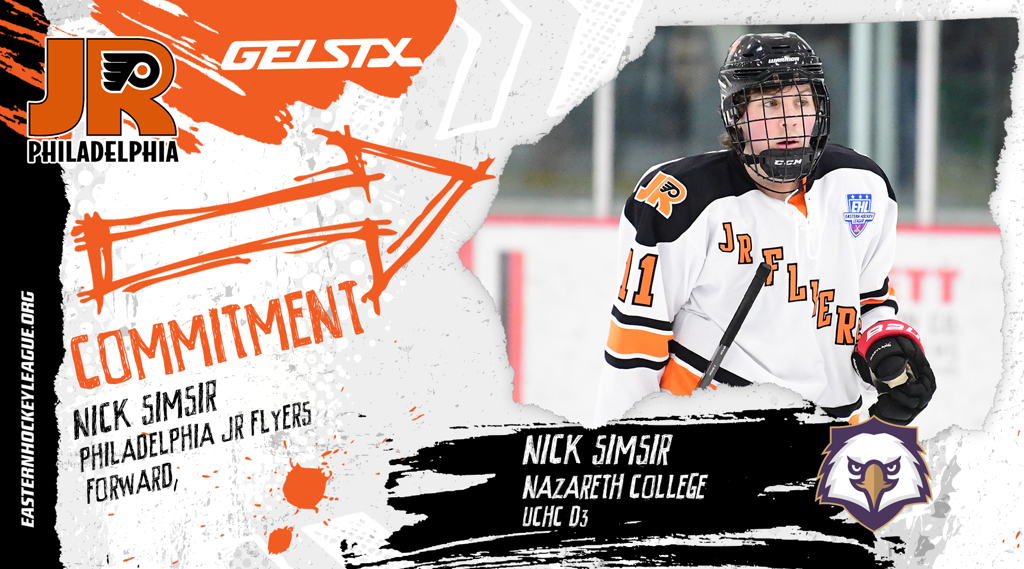